Amongst the various natural resources that Nigeria is blessed with, it is also one of two places in the whole world that has a suspended lake; the other is the Hanging Lake in Colorado, United States of America. Located on the Ado Awaye Mountain in Oyo states lies the phenomenal Ado Awaye Suspended Lake.

First, it is noteworthy to mention that a suspended lake is a body of stagnant water on the mountains. Unlike any regular body of water, this one is believed by the Ado and Awaye people to possess healing qualities which cured all sorts of diseases, ailments and is also speculated to remedy infertility. A fascinating fact about the lake is that it retains the same water even during the dry season.

From Lagos, it takes about four hours to drive to the mountain through Ibadan and about three and a half hours through Abeokuta. Although the climb up the mountain takes about three hours, the sight from the heights is worth it. The route to the lake contains many shrines and notable historical spots which all add to the thrill.

It is believed that when there was a drought in the land, the chief priest would tie a white cloth around the “waist” of the Ìshàgé Rock and it would rain very heavily. In addition to this, the rock is regarded as one of the most powerful among the gods on this mountain as it grants wishes to those that pray at its feet. What makes this rock so interesting is the fact that it stands upright on a steep edge on the mountain and has been like this without ever falling over. 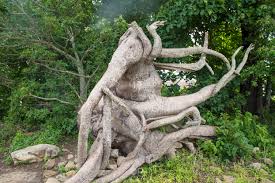 Yes, you read that right, the Elephant Tree and yes, it is shaped like an elephant. This structure is formed by tangled tree roots and trunks which dramatically takes the form of the head and trunk of an elephant.

Also known as the footprint of the elders by the locals, the Esè àwon Àgbà is a dramatic cluster of about a hundred foot-sized depressions set along the rock’s surface, proving pre-existing human habitation on the mountain.

When embarking on this adventure, we would advise you to head up with four to five bottles of water, comfortable shoes, snacks and great company like us at Geo Travels. In the business of creating experiences that expose people to the beauty of Nigeria, our Research Getaway package offers you the opportunity to head to this one of a kind location.

Any cookies that may not be particularly necessary for the website to function and is used specifically to collect user personal data via analytics, ads, other embedded contents are termed as non-necessary cookies. It is mandatory to procure user consent prior to running these cookies on your website.